The Band saws are widely preferred by both expert and amateur people to give their piece of board or wood a more compact shape and curve. Due to its versatility and easy to use a feature, it has been topping the list of most used power tools in woodworking and metal-working industry.

Band saws came with different shapes and types, while each has its distinctive feature and specific purpose. It is crucial for you to know which types of band saws are used for what kind of works to operate them smoothly.

This article, thus, will describe all the available types of band saws as well as their application. It will be a great benefit to your carpeting work.

So, stay tuned with us.

Likewise, other power saws and woodworking equipment, people have classified the band saws into different categories. However, all the bandsaws are classified from two different perspectives-

Let’s have a look at the various bandsaws those fall into distinctive types based on these two features.

Depending on the application of the band saws, experts have classified them into four types. These are- 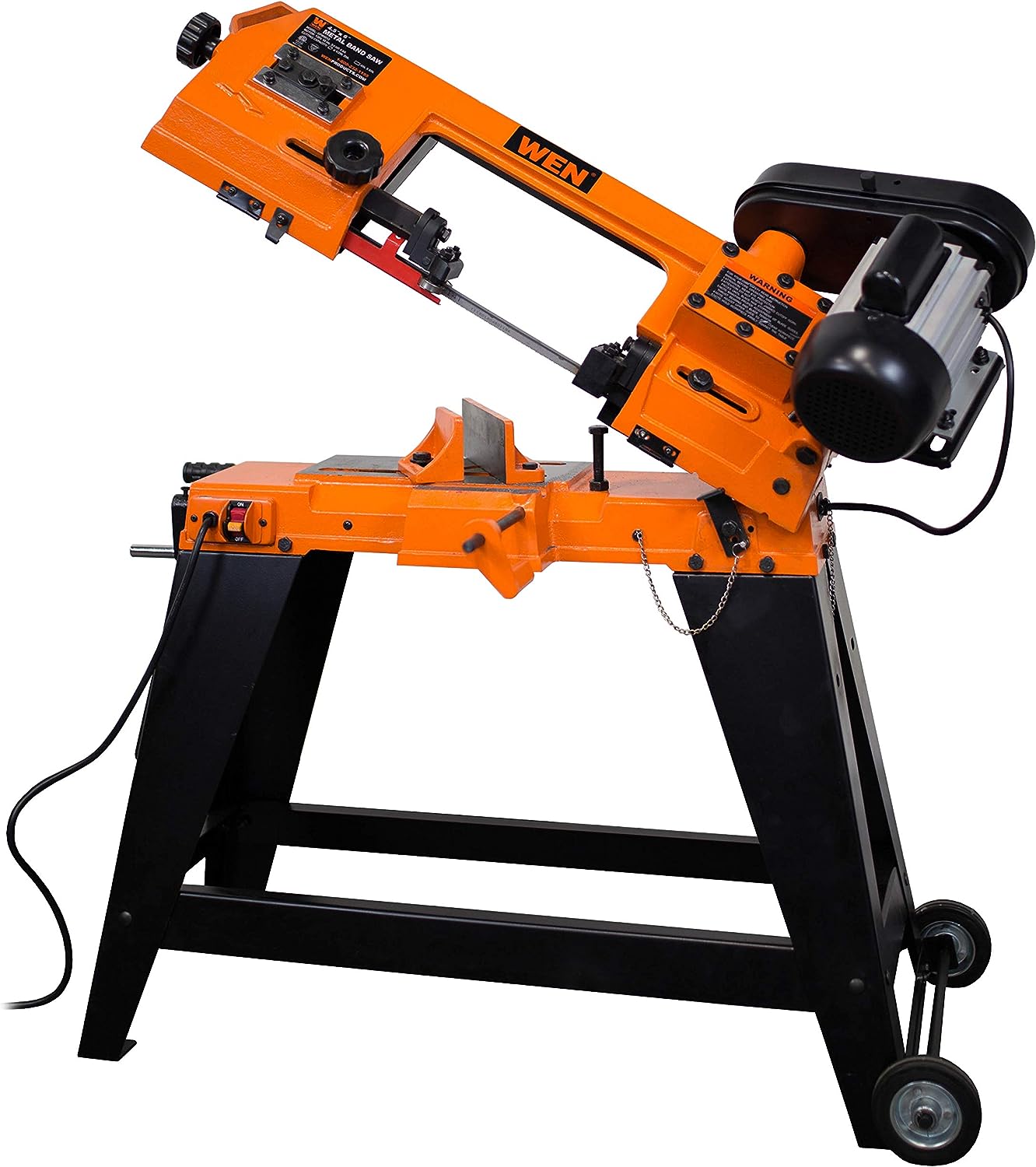 Although Metal Cutting Band Saw is quite similar to the usual wood bandsaws, it is specially designed to cut the strong metals. Their most significant feature is their blade. The blade is set at a lower speed to effectively cut through the metals. Moreover, the blade contains a series of teeth in each inch which makes the saw even more efficient.

These saws are again categorized into two different types-

Horizontal: People use it to cut down the more massive stocks or metals into smaller and adaptable size. It makes the job more comfortable by bringing down the metal or stock into a manageable size.

Vertical: This has a totally different use. Artisan or craftsman use it for contour cutting, polishing and fling to make their woodwork beautiful. 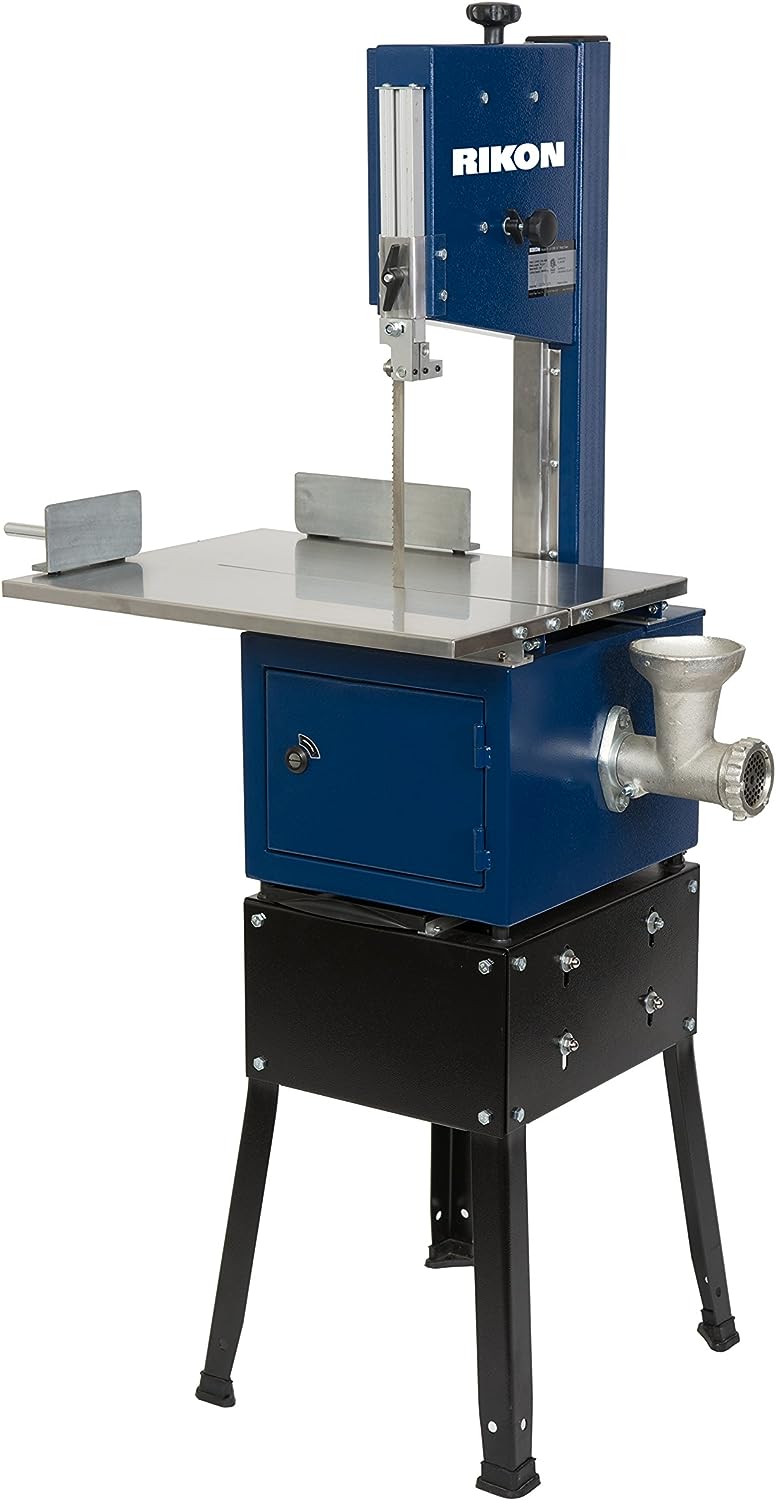 Have you ever visited a butcher shop and seen the butcher using a shiny steel tool to cut the meat? Yes, it is the meat band saw.

Typically, stainless steel is used to build meat bandsaws. These are constructed in a way so that it can be maintained and clean easily. Butcher’s have a close connection with it, but it is not limited only to cutting fleshes and thick bones.

Shapes or meat-lovers use the meat saws for cutting pieces of meat for steak and lamb. Moreover, some people use it to make mincer and spout.

Along with the table, wood band saws are one of the most versatile and useful tools for the carpenters. Professional and amateur woodworkers like it the most for its user-friendliness.

Workshops frequently use the stable versions to cut small woods, whereas, the timber mills use the larger wood bandsaws to rip vast lumbers. Due to the saws’ small cut size, the timber waste is minimal.

The three most common wood band saws are-

As the name suggests, they have cutting teeth on either side of the blade. They are mostly used for industrial-size band saws and tabletop. Their application is effective against metals and plastics also.

These are used to cut timbers into smaller sizes. They ensure minimum waste of the timber, thanks to their tiny kerfs.

The head saws come with large silver teeth on the blade. They are arranged at a 2-3 feet distance so that they have a profound impact on the wood stock. They are used to cut hardwoods such as Oak and Cherry.

They stand between a jigsaw and a typical table saw. They are known for producing more power within their short space. Most home workshop owners prefer using the benchtop band saws to get a quick and intricate cutting. They easily fit in almost anywhere, thanks to their compact size.

Depending on the shape and size, experts have placed them into three different types. These are-

You will need to place the saw itself on the floor to use it. It holds the stock downwards and works very quietly. They also provide better accuracy during the cuts.

Professional and amateur both like them. The horizontal band saws are used to cut large timbers into a smaller and manageable size. However, they are not sufficient for intricate cuts and creating curves.

Vertical bans saws operate with an electric motor to get even precise and smooth transmission. The blade of the saw rotates between the two wheels- a wheel above the workable and another one at the bottom of the worktable. The upper wheel is known as an idler, and the lower wheel is known as driver wheel.

The stock is moved from one end to another end as the blade cuts through it. The system allows carpenters to use it for intricate cuts and making curves. With appropriate use of these saws, you can accomplish some of the most complicated cuts which other band saws will fail to achieve.

Furthermore, they can also cut through straight lines with pinpoint precision. All these make it the most versatile and complete saws in the industry.

Popularly known as handheld band saws, they are famous for their lightweight and carrying ability. The woodworkers who work on the move, prefer these portable band saws.

However, their portability isn’t the only feature that makes them so adorable to everyone. They are capable enough to cut through the edges, create curved lines as well as more intricate and irregular cuts.

Moreover, they can effectively cut down the more massive timbers into smaller ones, and you can carry them close to the wood in case you can’t move the wood. Isn’t it an added advantage?

Whether or not, you are an experienced or newbie woodworker, the versatility of a band saw will always be beneficial to you. There is hardly any cutting job that the band saws can’t perform- from the straight lines to the most irregular cuts.

If you buy them from a trustworthy and reputed band saw manufacturers, you can be rest assured to get the best out of each type of band saws. Therefore, this article should turn out to be a valuable asset to people who have the least knowledge about the types of band saws and their application.